Samuel Taylor & Jodie Marie are from a land far far away, OK not quite but almost.

From the far corners of south Wales this beautiful duo go by the name ‘TAYLOR & MARIE’ they have been working quietly on their brand new debut EP ‘TILT THE MOON’ available to buy now.

Their debut video / song release is a cover of ‘Bad Moon Rising’ by the 60’s band ‘Creedence Clearwater Revival’. They have put a completely different spin on the song, it now has a bang up to date feel /sound, mellowly blending blues, country and a hint of folk, as found throughout their beautiful introductory EP.

Talking of country, the duo are I’m happy to say nestled deep in the Welsh countryside creating as already proved, nothing but beautiful music. Anyone who’s from or has visited Wales knows that the Welsh hills and lush landscapes are inspiration enough for creating great, honest music, as they have.

Now they embark on their musical journey together who knows where it will take them? As it happens the EP launch night is in London ‘Servant Jazz Quarters‘ with support from ‘Jimmy Brewer Music‘ 27th August.

As described on their official Facebook page here’s a little background about the duo, the making of the EP and a little about the ever popular Welsh studio ‘StudiOwz‘.

“Naturally, these songs were brought forth from these late night music sessions – listening and writing as a pure duo, and revealed a lunar theme – sparked from their cover of “Bad Moon Rising”, and concluding in their mournful ode to the eclipse of love “Tilt The Moon”

Recorded entirely in Wales at StudiOwz, located on a working farm which added a unique flavor to the takes – working in harmony with nature and following it’s cues for when to record, and when to take inspiration from the surroundings “We recorded some of the drums in the cows milking parlour to get the right reverb – it was pretty funny too, every time we pressed record, a cow would moo – without a doubt”. 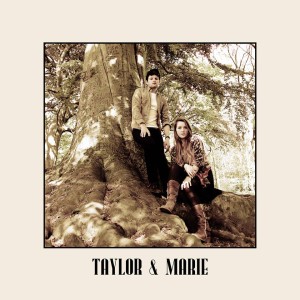 There’s such a natural chemistry between the two, something we’ve not seen in the industry for quite sometime. We’re looking forward for the musical love affair to grow into a full blown relationship, in the form of an album. They’re so complementary for each-other. We’re excited.

Judging by their intro videos / songs the duo’s EP will catapult them in to a bright future and the spotlight of media attention. They have a simple method in their early success, quality music.

Already they’ve featured in ‘Q’ Magazine, airplay on numerous radio stations including BBC Radio Wales (Artist of the week) and BBC Radio 2 to name a few.

After watching the second video ‘All I Need‘ I instantly fell in love with ‘Taylor & Marie’ and ‘Tilt The Moon‘ is a love song that will stir your emotions!

The EP boasts an array of instruments, the Harmonica, Banjo and Guitars played by both, so not only are they talented singer /songwriters they are also talented musicians too.

I don’t normally make comparisons, however for me ‘All I Need’ has a rendition of ‘ONE’ by Johnny Cash. Taylor’s grungy yet harmonious vocals complimented with the soulful voice by the beautiful Marie, work great together. This track is on the money, we can’t get enough.

‘Taylor & Marie’ are such a refreshing duo. They remind me of an onscreen developing love story, starting from their childhood days.

‘All I Need’ is the opening track for the brand new EP. It’s an outstanding and beautifully crafted track by ‘Taylor & Marie’ & for me it’s already a trademark track for the pair. Easy listening, refreshing and pleasing to the ear 10/10. Taylor & Marie are a musical match from heaven, also known as Wales! May the love story continue.