So I’m minding my own business at what I’d call a bit of a special night full of musical talent at Vins Night-In in London.

Joined by a room full of people on came the super talented Jamie Lawson (interview coming soon) after his set, I went off to grab a drink in the other room. I sat in the chilled area of the venue, with sofas and soft lighting. Then suddenly through the speakers came this voice that grabbed my attention, I had to investigate! There I was standing in front of this artist I’d never heard of, awe struck again.

I couldn’t clap enough after her closing song. Wow.

I ran over to congratulate her on such a powerful performance, we chatted and exchanged details. Finally, we caught up with each–other again.

Here‘s Carrie’s story in her own words.

Dwfmedia :: The song ‘I’d Rather Die‘ is kind of a trademark track, do you agree?

Carrie :: It’s was never my intention that it’s become the main track people remember me for, it just so happened that people liked it. I had a feeling when I wrote it, it was going to stick.

Funnily enough I had written that song along side another one called ‘Time Won’t Wait‘. I remember just recording the chorus on my phone. I went to Malta to visit to my family, coming back and stumbling across it again. This is something I’ve never told anyone, so you’re the first person to hear it. I stumbled across both of these choruses and said on my god I need to write these.

At the time I was in touch with my producer ‘Steve Orchard‘. We were starting to decide on which songs to record, I sent him a really rough demo and said lets record these.

C.H : ‘Taurus‘ EP features ‘I’d Rather Die‘ and ‘Leo‘ has ‘K.i.s.s.i.n.g‘ as the main tracks. People are more familiar with ‘Crash And Burn‘ from ‘Leo‘ EP. It’s funny because my favorite tracks are my feature tracks on each EP simply because they’re my favorites.

Dwfm : When writing, is it a secret from within exposed or is it simply from your imagination?

C.H : Quite often when I’m writing a song I have no idea what I’m writing about until I’ve reached the final line. Sometimes I don’t know what a song’s about even when I’ve finished, someone usually offers a suggestion later, that tends to be the case when I’m writing for myself.

When writing for other people I tend to have a subject in mind, mostly because it’s requested. Usually when I receive a request for a song I’m told the person I’m writing for is into this or that at the moment, we would like to press on this subject. I find myself following instructions more.

When I’m writing for myself I really let go, I don’t even plan a song. I just sit at the piano and if a song just comes to me I follow it through. It’s very much following my own instinct. All my songs come from a very subconscious place. That’s why I find myself revealing my own secrets to myself through my songwriting. It’s very therapeutic, that’s how I approach songwriting. I take songwriting as a therapy. I use it for myself as my therapy. 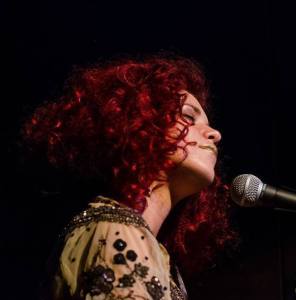 Dwfm : During your musical journey name one event that stands out for you?

C.H : I have to go with when I was in LA about 4 or 5 summers ago. I went to a summer camp and it was all about music, introductions to successful industry people. One of them was ‘Patrick Leonard’ who produced for ‘Mariah Carey‘ ‘Madonna‘ and ‘Natasha Bedingfield‘.

He was giving an amazing workshop, on this massive stage in a really big theater. I was on the front row seated next to my vocal coach. After the improvisation class he was taking questions. I put up a really shaky hand thinking oh my god am I really going to do this.

Every single second that passed until he chose me I was thinking please change the question.

I decided to ask it anyway. My question was, can I come on stage and jam with you.

He was shocked but impressed at the same time and invited me on stage. He sat at the piano and asked me what’s my style. I played him a little chorus, after which there was a resounding applause from the whole workshop. Then he said I get it, I get it and he started playing this piece which he never played before. I’d never heard it before and right there and then with my mic in hand, we wrote a song in front of everybody.

It was something that will always be in my memory, it was absolutely wonderful.

That closely followed by my one to one performance for ‘Annie Lennox’. I was called in one day and told ‘Annie Lennox’ would like me to perform for her in her studio, tomorrow.

So I rocked up to her studio and did a mini gig of my own songs for her. She offered me her studio where I recorded the video for ‘Crash And Burn’ and ‘You’re My Everything’ which is a ballad that I haven’t released yet, haven’t produced yet, but is available on YouTube as a live performance.

Dwfm : Did you wake up thinking you want to write / perform music. How did it settle in your heart that this is it?

C.H : It started off being just a popularity contest at school, I just wanted to fit in.

I was in a group of people that excelled in something, all of them did. I felt a little left behind, because I was just average at school. I never considered myself to be above average. I felt that I needed something to put me up there with them.

One day one of the group started humming a melody, everyone went crazy saying that’s amazing, you just wrote a song. It was just one line and they called it a song.

I thought oh, that got some attention. So I decided that I was going to do the same. I never looked back, after that I was writing at least one song a week. Every week I remember bugging my friend so much to come and hear my new song. I was so desperate for their attention I wanted to show them how cool I could be.

In the end rather than being happy about their attention, I was actually more interested in the songs I was writing.

Dwfm : Quickfire questions, if you wish to explain your answers please do. The Moon or Mars? Mars.

Full English or Continental? Continental. Photo’s or paintings? Paintings, no photo’s, it depends. I like them both. I like photo’s that have paintings added to it.

Dwfm :Now signed with ‘Fairwood Music‘ what can we look forward to?

Part two will be released next week, be sure to come back and find out something quite special :: TBC