I’ve been a quiet fan of ‘Lauren Aquilina’ since the YouTube uploads from her bedroom that she still does to this day.

Lauren still in her teens 18 to be precise (19 years old July 2014 ) has been making a name for herself for quite some time, slowly developing and in my eyes she’s growing in years and talent. Her latest video release ‘Lovers and Liars’ is proof of what I’m saying. ‘Lovers and Liars’ is taken from the upcoming third EP release ‘Liars’ available March 10 / 2014 .

In October 2012 she self released her debut EP ‘Fools’ through her social media sites. She created quite a stir and I do believe she even trended on Twitter. ‘Fools’ finally settled in the top ten iTunes charts, causing a quite media buzz.

Also check out the video ‘Fools‘ I remember back in September 2012 staying up till silly O’Clock to be one of the 1st to watch it and I wasn’t disappointed with such great visuals and production. The only thing I was saddened by was, she held an online comp to win one of the keys from the actual video, and never won 🙁 I tried so hard too. Gutted dot com!

So under her belt is ‘Fools‘ EP ‘Sinners‘ EP and the upcoming ‘Liars‘ EP. <~~ Click either to be redirected to corresponding video.

Headlined on the BBC introducing stage at ‘Reading festival’ added to the ‘BBC Radio 1 introducing playlist’ had sold out shows worldwide. Not bad for an 18-year-old and she’s only just getting started.

I remember recently she announced that she was heading up north to do the video shoot in the snow for ‘Lovers and Liars’ and complaining how silly she was to want to film in snow and water all the time, also same for ‘Fools’ and ‘Sinners’ haha Lauren I say only one thing, we all love the video’s / songs and visually they look great, so I thank you for all the coldness you have endured, tea and Bourbon biscuits.

I see Lauren’s growth and even background, very similar to the lovely ‘Gabrielle Aplin‘ with simple YouTube uploads, BBC introducing, huge following, already established fan base and it wasn’t long until ‘Gabrielle Aplin’ ( featured / interviewed on dwfMedia ) was signed up and had her first number 1 UK hit Christmas 2012.

Now signed with Island Records / Universal Music I feel that the same path & destiny is set for the lovely ‘Lauren’. 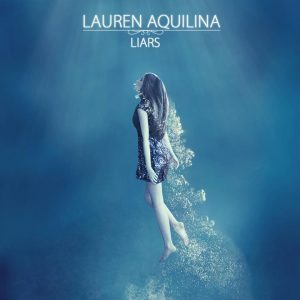 Check out the latest video ‘Lovers and Liars’ and let me know what you think, is this the way forward for future unsigned artist’s? It certainly worked for Lauren Aquilina.

May I personally wish you all the best for your future and I love everything you do, keep up the great work.

In Laurens own words a self review she did via iTunes “Overall it’s probably the best EP ever made. Although I feel it’s lacking something. It needs more dubstep” Watch this space guys/girls.