Earlier this year I had the opportunity to attend ‘Brecon Fringe Festival‘ 2013. I seen quite a few great acts just popping in and out of various pubs and what a good weekend it was. Loads of local food, beers, great crowds and most importantly good music. An all round great vibe.

However as I wandered the streets searching for my next pint and live act, I heard some music coming from the doors in a local ‘Cons Club’ that caught my ears.

I found my spot and settled down while my friend got some refreshments. Then the next track of this band began.

I was taken in awe with the quality and sound of this band and depth of the lyrics blew me away. I got quite emotional as it happens.

After the gig I approached the singer (Later learning his name is ‘Rob Lear’) and said how much I enjoyed the music and how it made my night (Thank goodness the doors of the venue was open) we talked for a while and I ended up receiving his album ‘Let It Go’. During our conversation he stated that he was performing at Big Scott’s live event at ‘The Royal Oak’ Cardiff.

I wanted to attend this event but sadly I couldn’t make it. The next chance I get, I will be going to watch ‘Rob Lear’.

On the journey home I listened to the CD ‘Let It Go’ in it’s entirety. The album ‘Let It Go’ is so easy listening. Great vocals, strings, accordion, drums and keys giving it an all round airy, warm feel.

The lyrics that actually mean something and none of that repetitiveness that we’re used to these days, it’s refreshing to say the least. The album ‘Let It Go’ left me wanting more. 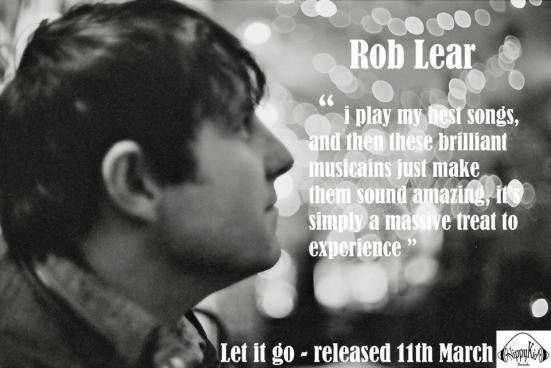 The first track ‘Never Do’ has such an uplifting vibe and huge original sound. I won’t give any comparison, as this band have a completely unique own-sound, it just wouldn’t be fair. Ok I have to throw in a ‘Munford and Sons’ likeness.

The whole album is one I will treasure, with variations of Indie vibes, mixed with subtle country and western sounds in some tracks such as ‘Elvis’ and ‘Hearts On The Radio’ it’s pure entertainment all the way.

My favourite has to be ‘Let It Go‘, ‘Just Love’ and ‘Heart Strings’ I could say the same for all of the album, they all have a touch of something special!

I love the harmonies and that kind of feeling of spaced out, drifting away airy feeling I get.

It’s like sinking in your own custom made bean bag by a log fire, a glass of wine and a few mates around and with a touch of ‘Let It Go’ magic all your worries are gone. That’s the best way of describing how it’ll make you feel.

so much heart and soul has gone into the production and making this album it will outlast many others I have in my collection.

Don’t take my word for it, check out ‘Rob Lear‘ for yourself and show some support for a great musician that’s in it for the long term. You’ll thank me.

I want to thank Rob and the band for giving me such a beautiful gift of music. Keep doing what you do best. May your future take you on a road that’s always forward….

Check out the 6 tracks available to stream via link below!

To find out more head over to ReverbNation :: http://www.reverbnation.com/roblear