Igniting the festivals throughout the stunning summer of 2013 ‘Dr Meaker’ (Bristol’s finest Live Bass Music Act) have been smashing it globally.

Make no mistake these guys didn’t just appear from nowhere, they’ve been making a name for themselves for over 10 years. Producing for the likes of ‘Doom Man’ – What Does It Say About You (Onslaught Recordings) and ‘The King Blues’ who had the record ‘The Future’s Not What It Used To Be’ that became Zane Lowe’s (BBC Radio 1 DJ ) hottest record of the week.

Remixing for the likes of ‘Mr Frogg’ and 3 times ‘Grammy’ award winner legend ‘William Orbit‘ who’s worked alongside huge artists such as Madonna, Blur and All Saints.

In the bag for Dr Meaker are the hits ‘Shak Out’ ft Astroid Boys. The classic ‘Fighter‘ with additional production from ‘Octo-Pi’ and the banging track ‘Music In The Night‘ released on (V Records) more recently ‘Dont Think Its Love‘ ft Romaine Smith to (New State) oh and I love their cover of Adele’s ‘Skyfall‘ that was aired on Trevor Nelson’s BBC Radio 1Xtra (Maidavale Live Lounge session) show, naming just a few of my favourites.

During the interview Phil spoke of his support for ‘Dr Meaker’ from their very 1st show on air, playing ‘Fighter’ I want to go back to the very start. 6 years ago, that’s when you guys won the ‘Glastonbury’ ‘unsigned Dance act’ have you seen the dance music world evolve over the 6 years? (Phil).

Dance music’s been in the charts for a long time. Certain genre’s that weren’t big have now become big, So we’ve had a Drum n Bass number one with ‘Rudimental‘ and ‘Dj Fresh‘ and stuff like that.

We’ve been doing Drum n Bass since day one. It’s great for us, because now’s the time that we can get more exposure to the masses with our style of music, without having to change or do anything differently. It’s really cool: (Clive, Dr Meaker)

‘Dr Meaker’ have been described as Soul, with underground Drum N Bass edge.

Do you have issues with certain labels and being pigeon holed into certain genres? (Alice).

Yes, I think we do. because we’re so varied into what we do, we love music generally. We’ll listen to anything and being pigeon holed into one genre doesn’t really sit with us: (Lorna, Dr Meaker)

But it is good because the music we put out has worked for the labels that have taken it. So far we have done one single at a time. That’s what we’ve been doing, just seeding ourselves out there. The labels that have come to us like ‘V Recordings’ or ‘New State Records’ etc they’ve loved that particular track, so they’ve signed that track, but maybe one track wasn’t right for the other and the other wasn’t right for the other. We’re trying to consolidate our sound a bit more so that we can make an album. We want to make an album basically. (Clive)

Check out the interview I did with ‘Dr Meaker’ late last year, right here on dwfMedia. Click here.

Check out all the links below and be sure to Follow, Like and Listen. Keep in the know and upto date with everything DR MEAKER. Exciting times are ahead. 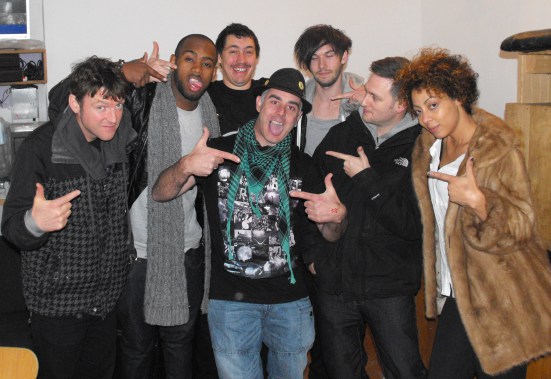