****NOT OFTEN I GET TO SAY THIS BUT, BELOW IS A RESPONSE TO THIS REVIEW FROM EXAMPLE HIMSELF****

Due out 8th September 2013 is Example’s new track ‘All The Wrong Places’ available for Pre-Order now.

Fresh off the press is Example’s latest video ‘All The Wrong Places’.

The minute I seen and heard this it immediately took me back to my early rave days, like way back in the 90’s. I hear touches of ‘Technotronic’ or early ‘Prodigy’ or even ‘Snap’ mixed with D&B (That’s Drum and Bass, incase you didn’t know) maybe you can relate, maybe not?

However fast forward to 2013 and here I give you ‘All The Wrong Places’ or #ATWP as will be recognised via the social media Twitter (It’s a trendy place to Tweep, I mean chat).

I personally like this new one, great beat and all round good track. Example himself said “I can’t sing” but he sure does something right and like it or not, it will still make him shed loads of cash.

My personal favourite is ‘Kickstarts’ Released earlier in his career in 2010. I guess for me it’s more harmonious and less repetitive and the video is pretty damn cool.

The only 2 things I have a problem with, is he selling himself bit by bit? The reason I say this is because

1. He references a lot about rabbits (Not the 1st time).

2. I see a lot of Mobile phones in the video with a brand name that keeps popping on screen ‘Xperia‘ hmmmmm I know you’re signed to ‘Sony’ but Keep it together dude, don’t let the fame get to your. Hang on as if he’s going to read this! 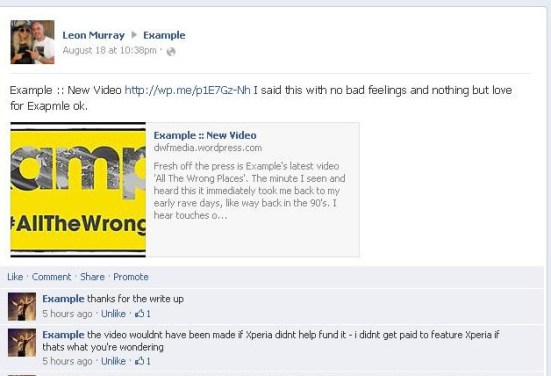 ****Well who said that Example wouldn’t read this, I eat my own words & PERSONALY thank Example for his response. Here’s EXAMPLE’S reply to this review, 1st with a thank you followed by an explanation. ****

One thing for sure is it hits all the right places with thousands of fans worldwide. Only you can decide. 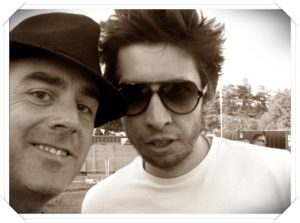