Hell NO………It was everything and so much more!

OK have you all ‘Gardeners’ come back to reality yet? Below is a brief description of my time at S.G.P 2013.

After 4 days at Secret Garden Party I had that feeling like I went down ‘Alice In Wonderland’ rabbit hole, just making it back. 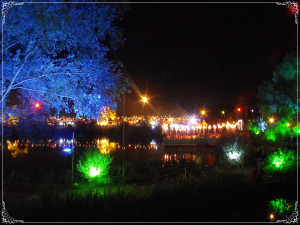 I parked up, and walked towards the entrance. I was greeted by the ‘Jukebox’ playing dance tunes getting me right in the mood, a free program was handed to me by mysteriously dressed stewards. The program was a book of dreams, where you could plan anything that’ll take you into a 4th dimension, because what you plan would never turn out to be quite what you think, as I soon found out.

Thursday night : Setting up next to some ‘Posh Showers’ and amazing campers as neighbors, I was ready to go. Greeted by the array of stunning lights set out around the ‘Lakes’ and along every foot-path, not to mention the lights from the fair ground situated on site. I found a phone box (odd? but it is ‘The Secret Garden Party‘ after all) as I do I stepped inside, it wasn’t the ‘TARDIS’ but may as well have been. Walking further on the path, I was greeted by mysterious costumes worn by the Gardeners, only to end up finding a hidden DJ stage, old pianos and graffiti on boards.

The theme was ‘Superstition‘ and already I was lost in an underworld of delights. I hadn’t even touched the surface to what was on offer. 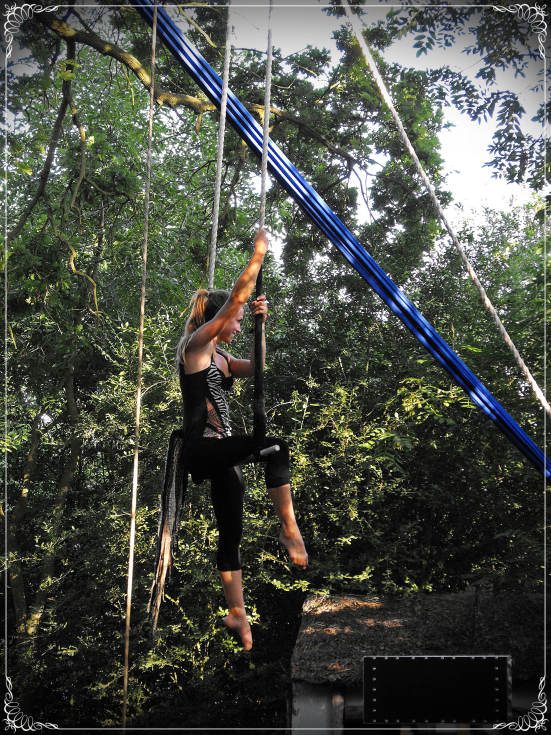 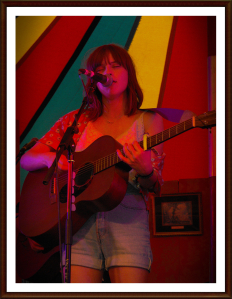 Friday : I woke to beautiful sunshine excited and ready to face the music.

On my journey I passed so many ethnic food joints, I was spoiled for choice or the choice of a simple full English breakfast (I opted for that in the end) armed with my camera, I decided to take some photo’s as seen here.

I ended up in what I called home ‘The Living Room‘ stage. Set out with chairs / settees made with covered bales of straw, a stage like a front room complete with it’s own wallpaper. Here I chilled to ‘Skip ‘Little Axe’ McDonald‘. During this set I heard a whisper that a secret guest will be making an appearance, so I hung around. 15 minutes later after topping up with a cold beer ‘Gabrielle Aplin‘ decided to join me in MY ‘Living Room‘ to perform a full half hour set. My smile was irreversible. 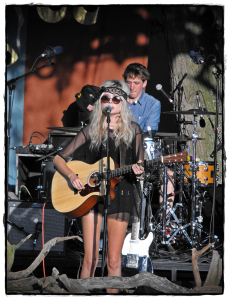 Then I headed down to ‘Where The Wild Things Are‘ stage to see another musical sensation ‘Nina Nesbitt‘ with an exclusive performance of her upcoming single ‘Peroxide’ and my favorite song ‘The Apple Tree’. This stage was built out of trees yes that’s right trees, surrounded with wooden branches decorated by bright coloured buntings and lights, overlooked by the beautiful Lake. In the center of the lake was a stage that looked like a full sized, half sunk pirates ship, in the clasp of an octopus. Only accessible by boat. 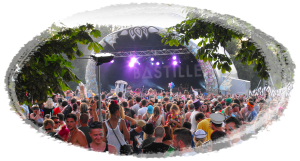 After Nina’s set I rushed over to catch the 2nd half of ‘Bastille‘ over at ‘The Great Stage‘ where I’d say there was thousands who had the same idea. The atmosphere was electric.

Catching my breath I rushed back to ‘Where The Wild Things Are‘ stage to see the incredible ‘John Newman‘ the gardeners were there in force. 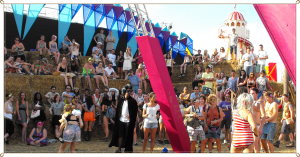 Oh yes somewhere between all this I seen Naked mud wrestling at ‘The Colo-Silly-Um‘ stage.

After all this I wombled around checking out ‘The Village Hall‘ and ‘Secret Forum‘ and got involved in some of the workshops, where I ended up making my own hat at this craft place (I forget the name).

Keeping a close eye on the time (as it was flying) I didn’t want to miss a recommendation by some new friends I’d met up with, ‘Public Service Broadcasting‘ slightly tipsy I arrived at my destination, sat on the top of the purpose built wooden bridge overlooking the stage (again gardeners was there in force, something good was about to happen, I could feel it) reveling in the visual delights of 9 screens projecting 1950’s TV broadcasts while the music resonated through the smoke filled stage, I wasn’t sat down for long, I had to dance.

Saturday : A little worse for wear, after last nights shenanigans I took it easy. Taking in all the sounds and sights of my world of superstition. I seen someone get resurrected in some place? Visited ‘Asstrology‘ ‘The Art Box‘ ‘Witches Of Odd‘ were my favored delights of the day.

Later on I found myself in ‘The Living Room‘ again where the talented ‘Janet Devlin‘ blew me away, such a shy yet humble young lady. 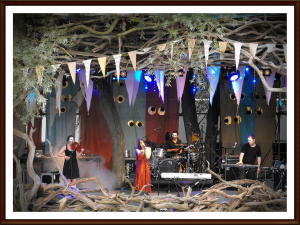 stumbling across other stages/rooms I seen ‘Willy Mason‘ ‘The Family Rain‘ followed by ‘Findlay‘ recouping with refreshments and ice-cream I was all set and bouncing back from the night before. I was ready for one of my Highlights for Saturday ‘Phildel‘ at ‘Where The Wild Things Are‘ with a performance that’s fit for ‘The Great Stage‘ blessed with world-class vocals, violin / Keyboards and drums ‘Phildel‘ simply took me back to what I can only describe as my ‘Twilight Zone‘ Magic was in the air.

Having my face painted I was now at one with the secret world. After listening to ‘Phildel’ I was greeted with a face I recognized, my fellow blogging friend Stevo music man (for a moment I was reminded I was still in the real world) we chatted and went to grab refreshments and headed to ‘The Great Stage‘ ready for the 2nd highlight of the day ‘Faithless‘.

We found our spot, chatting away when suddenly all the lights went out ‘World War 2’ type sirens blasting (boom I was back in the magical world) surrounding the lake was an array of fire performances that lit up the whole area, then IT began!

Now I have experienced ‘Disneyland‘ and Hong Kong, Chinese new year fireworks displays, but what unfolded was quite simply out of this world and the best fireworks display I’ve seen to date. Finishing about 30 minutes later the finale the ‘BIG BURN‘ where the Pirate ship was set on fire, illuminating the whole lake. The atmosphere was electric. Then with no opening announcement ‘Faithless‘ just took over the whole event and it became a music for the masses finale (I’m sure there was 20,000+?).

Sunday : (Was it Sunday? oh the party continues, I was disorientated by this point) I know I seen the beautiful ‘Annie Eve‘, then I headed over to be educated at ‘Guerilla Science‘ marque, where by the time I arrived they was holding a ‘Science pub quiz’ (why did I come here?). Gathering myself together I headed over to ‘The Drop‘ stage where I do believe I seen ‘Disclosure‘ then I went to see an artist I liked the name of, performing at ‘Woodburner‘ stage ‘Ellie Rose‘ quite liked her too.

I continued my search to discover more new talent, I seen near ‘The Village Hall‘ PIG RACING. Yep good old fashioned pig racing, bloody loved it, sadly the one I picked lost. Moving on I relaxed by one of the smaller lakes, watching people diving and riding bikes off a ramp into the lake, I also seen ‘swing dancing’ (kitted out in old fashioned clothing) some other shows I can’t remember the names of. 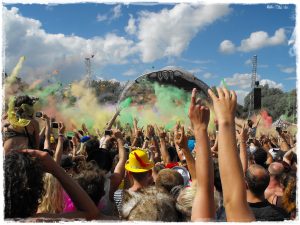 Then 3 pm sharp ‘The Infamous Paint Fight‘ against the Virgin Gardeners and the Garden Veterans. The minutes turned into hours and the sun was setting for the last night. 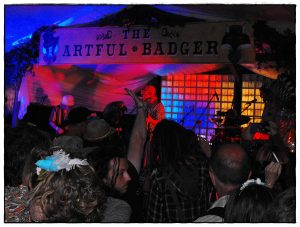 Will And The People

Now I promised myself to see ‘Will And The People‘ over at ‘Artful Badger‘ stage set deep in the woods, I heard the name but wasn’t sure who they were. Oh boy did I skank my feet off to them, while the crowd surfing and a stage invasion took over.

Then it was time for my Sunday highlight 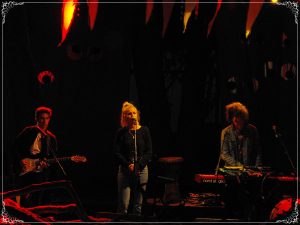 ‘London Grammar‘ at ‘Where Wild Things Are‘ unadvertised in the ‘GOOD BOOK, 13. The posters dotted around saved the day. This trio performed such a beautiful set and the whole crowd was in unison, it was stunning and quite moving. So having seen them it was over, or so I thought ha-ha. 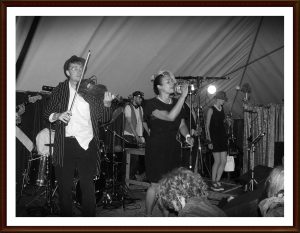 I’m casually strolling about, I hear jazz /ska / funk coming from ‘The Village Hall‘ only to find ‘Alternative Dubstep Orchestra‘ that was it till the early hours of Sunday. Then buzzed up, I headed back to my tent to wind down and got some well deserved sleep.

This is by far the BEST festival ever, in the whole of the land. With such a variety of things to do and see, it’s not just about music, as you have just read. I’ve kept it short, there is simply too much to mention and if you ever get the chance to go, no I’ll rephrase that. Next Year make sure you put ‘SECRET GARDEN PARTY’ in your reminders / diary / or scribe it in the garden tree, but do not forget. It will be the BEST experience you’ll ever have and by far the BEST value festival money can buy.