If you’re looking for new music that’s going to get you into festival mode or simply get you excited about summertime, this is going to suit you down to the ground. New Age Entertainment at its best.

Their debut album ‘ The Kreuzberg Press’ has an echo of early electro-pop sounds. Bursting with melodic upbeat synth’s, mixed with indie pop vocals and beautifully blended bass riffs. Man Without Machine’s album is what I like to call a “back to basics”.

Already released in 2012 is the single ‘Something’s Happening Here’ and has set a nice platform ready for the album’s release in March 2013.

If you’re an 80’s rocker like me, you’ll instantly be reminded of the good old days. Remember Depeche Mode, Duran Duran, New Order or even the Pet Shop Boys? You’ll soon get the picture.

Even if you’re dedicated to modern day music still rocking out your teenage years, this band should not be dismissed, in-fact you’re in for a treat. This is one high-energy uplifting refined sound. 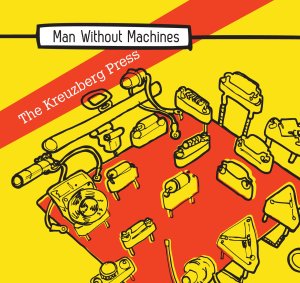 These guys have produced an album that’s so unique in its own right ‘The Kreuzberg Press’ deserves nothing but appraisal.

Man Without Machines are an extremely refreshing band. Fixing my ears on quality, easy listening music is such a treat. Mark my words they’re paving their way at full speed ahead into the modern day music scene.

Keeping a very contemporary clean modern sound; this is one album that’s set for replay throughout 2013.

A personal favorite is ‘Something’s Happening Here‘ kicking off with drums, guitar, rhythmic synth’s and those catchy lyrics, was enough to get me dancing.

March 2013 Man Without Machines will be releasing their debut album ‘The Kreuzberg Press’ on Man Vs Man Records.

Beginning as a two piece Adam Lockhart and keyboardist Valerie Campbell. The line up has gradually increased to the full contingent including Andrew Mitchell on bass and synth, Michael Benbow on drums and Stephen McCullough on guitar and synths.

Opening track ‘Even Still Even Though’ is essentially an electro pop ballad quickly kicks in with heavy drum and stabbing synths. The electro indie track is about the alluring nature of consumerism and fits nicely alongside ‘Share The Love’ which focuses more on the current bank crisis.

The album title ‘The Kreuzberg Press’ refers to Kreuzberg in Berlin notably for its radical and counter-cultural movements in arts and music. Lockhart’s fascination with David Bowie and Iggy Pop during the 70’s, along with the German newspapers and publishers. This led to the album title and underlying political themes found in the album.

Adam Lockhart is the principal songwriter, vocalist and guitarist of the band. He is also known for his contributions to lo-fi Scottish act ‘Spare Snare’ who caught the attention of John Peel resulting in four live sessions on his show along with a Marc Riley session.

Fast becoming favorites on the live circuit, Man Without Machines have seen themselves sharing a stage with the likes of Django Django and Meursault.

New single and opening track ‘Even Still Even Though’ will be released in February 2013 with a UK tour planned throughout 2013.