If you like Emile Sande, Macy Gray or someone with Soul, Blues or Pop, you are going to love this. 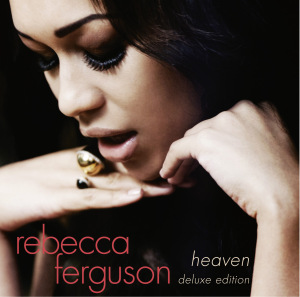 Rebecca Ferguson is back, with a Deluxe Edition of ‘Heaven’.

Loaded with 5 stunning extra tracks, such as ‘Back Track’ ‘Strange & Beautiful’ ‘Good Days, Bad Days’ ‘I’ll Take Care Of You’ (Live at Liverpool Echo Arena) and ‘I’ll Count The Days’ taken from the forthcoming new series of ITV1’s “Downton Abbey”.

This is one album I can assure you, won’t gather dust or be forgotten. It’s simply stunning.

It’s so easy to forget her background and struggles, and impossible to believe she once was someone with confidence issues.

Rebecca has a voice that is quite simply unique and is full to the brim, with Soul and feeling.

Her voice is mature and natural with a tone that very few can master, she puts some artist’s who’ve been in the industry for many years, to shame.

Little did she know back in 2010 her audition on X.Factor and song choice would be so relevant, singing ‘A Change is Going To Come’. The judges was wowed, they knew she had a voice that’s relevant to today and on the money. The rest is history.

In 2011 she went on to release her Debut Single ‘Nothing’s Real But Love’ followed by her debut album ‘Heaven’ co-written by Rebecca and sold over 500,000 copies to date.

Also November 3rd keep an eye out for her at the MOBO awards, she’s nominated for Best Female and Best Soul R&B act. It’s just the beginning for this young lady.

‘Heaven (Deluxe Edition)’ is one that you will play over and over and never tire of, each experience takes you somewhere new.

Crank up the volume, or plug in your earphones and enjoy the ride.