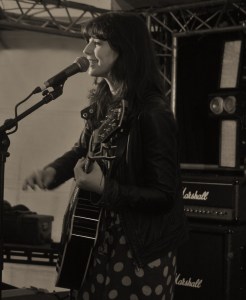 Did you enjoy your performance at Beach break live 2012? I loved it, I really enjoyed it; the crowd was great, they were even singing along to my songs. I also played here last year.

‘Buckle up’ is a happy song, and its about life and it’s journeys, could you explain it a bit more? Thank you for listening to it! It’s always difficult to talk about songs because everyone has their own interpretation. Like you said, it’s a happy song because its got that motivational aspect, but it is about how life never turns out as you’d expect it, about for better or worse, so its about the challenges you’re faced with.

What inspired you to write the lyrics, the background of it? Well, I grew up in Berlin and I moved back to England about four yeas ago to give the music a shot. I was living in a tiny bedsit and started from zero. I had no idea how to become a musician. The song came about in a moment of trying to figure out how to make a living and how the industry worked, it was that kind of moment. 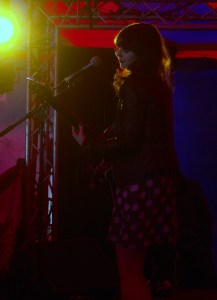 What can we expect from your forthcoming album? I recorded it with Gordon Raphael in Berlin, Why did you choose to record it in Berlin? Well, any excuse to go back to be with family in Berlin!

What Label are you signed with? I have released stuff previously with a really friendly online label called Zube Records, as for the forthcoming album I’m undecided at the moment, I’m really thinking of starting my own label.

Whats it like to be an artist in Berlin? is it easier? I’d recommend for any English or American band to go to Berlin to gig, there is so much love for English bands in Germany and Berlin is a great city for live music with so many places to perform. I love performing there because it’s like a homecoming gig.

Its quite a big decision to move away from friends and family, has that inspired you in anyway? Absolutely. That’s what it was about really, I really wanted play in front of an English speaking audience because lyrics are important to me and sometimes that was a problem when I performed in German. Its so nice to receive comments or reactions to my lyrics etc.

What track are you most proud of yourself? At the moment I love performing ‘Some kind of creature’ because it’s taken my music in a bit of a different direction.

When was the cross over from just writing lyrics to actually making Tracks? I starting performing at an early age, my 1st gig was when I was 10 and I started writing my own songs when I was 16.

Did you ever think you’d get this far back then? It’s so rewarding when I set myself little goals. I remember when I first moved to London and I walked past the Barfly in Camden, at the time I thought “wow, it be a really cool venue to play at, that’s on my to do list!” and then I got to play there a couple months later. It’s so important to look back on what you’ve achieved, it’s easy not to do yourself justice if you don’t.

Whats lined up for the rest of the year? I’m so excited about the new album, that was another one of those moments, had you told me 6 months ago I was going to be recording my album with Gordon Raphael, I’d have been like “no way”! and then it just happened (How did it happen?) I’m a very big fan of Regina Spektor and The Strokes, I just researched who produced their records and it was him. He’s from Seattle but by pure chance he happened to live in Berlin at that moment so I just sent him an Email with some of my demos and he got back in touch. He’s the nicest guy on the planet he lives for the music as an art. We finished the album and it’s all mastered and ready to go, it will be released early next year, but the date’s not set yet (stay tuned!). I’m releasing my 1sttrack ‘Red and White Blood Cells’ as a small give away online: Click Here: For the Free Download of ‘Red and White Blood Cells’

How does it feel as an artist to have a following of fans who want Your music? You write the songs and as soon as you put them out there it’s out your hands and they take a life of their own. Sometimes people latch onto something, at times it’s the song you least expected. Actually, when I wrote ‘Buckle up’ I considered it a kind of throwaway song. It wasn’t until I started playing it live and people started singing along and enjoying it that I thought it might be a good song.

Your Final words for New artists. Love what you do, that’s the only way to get through all the tough bits. If you’re just starting out, my piece of advice would be to just to play as many open mike nights as you can. That way you get to meet other musicians and you get to practice and meet promoters as well. Just play as much as you can.