A 6 piece band for your pleasure and desires only, it’s the band that OWNS Gyp-step. They cause crowds to burst into dance and chaos, by using a little ‘MJ’ Magic, adding a mixture of instruments and throwing in a dash of what they call ‘Sexfoot’ mixing it all up and you have ‘Molotov Jukebox’.

DESCRIBE THE BAND. Gyp-step, dirty mixture of music that we all love. Latin / ragga / Latin beat, every kind of music we like and love.

‘TICK TOCK’ VIDEO WHERE WAS IT PRODUCED? In the south of Spain in Andalucia near Orgiva, it took ten days of mental planning and 3 days filming. The slightest touch of the face paint it would smudge, as soon as we finished shooting the video, for 3 days after it wouldn’t come off. Angus and Max actually dug Nat’s grave. (Theoretically you’ve been resurrected Nat?) I have, and now I got my coffin when I die everyone can just spend their money on booze instead (Nat). Sirius features in the video and shaved his head for the most realistic monk look for that period. A guy called Marco Sanderman is the director who also filmed ‘Laid to rest’ he’s a great guy and Sirius Flatz, Producer.

WHAT STYLE IS THE ‘BANG’ EP? It’s simply Molotov jukebox. It’s he next step to getting more like the closest live sounds as possible on to a Cd. Making the music as exciting as it is live and keeping that spontaneous energy as it is on stage.

THE MOST MEMORABLE PLACE YOU’VE PERFORMED? 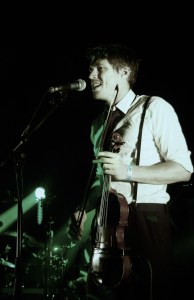 A place called ‘Farbella bar’ a travelers town in Bahia, Brazil in a main bar street. We turned up in this bar and asked if we could play, the bar man was like yes your on at midnight. There was 2 people to start, by the time we finished you couldn’t see anything it was packed. That night there was a storm and rivers coming down the streets, all the lights went out; but everybody still migrated to watch us it was great. (They would love to go back one day).

WHO CAME UP WITH THE NAME ‘MOLOTOV JUKEBOX’? Me and my little mental staying up too late elf’s. We was at ‘The Secret Garden Party’ had no sleep for 9 days solid. Me and Nat was playing some music and the guy who was running the tent approached us, “we love to book you guys next year who are you” I said we don’t have a band, but we will be called ‘Molotov Jukebox’ (Sam).

DO YOU SEE THE BAND TAKING OVER THE WORLD, WITH GYPSTEP OR SEX FOOT? Yes Definitely. with sex-foot and Gyp-step its a tough one, Both.

WHO WRITES THE TRACKS? One will have an idea, usually Nat or Adam. Between 3 of them Sam / Nat and Adam will write the lyrics and bring the bare bones of the track to the band, and then we all go from there.

WHAT’STHE QUICKEST TRACK YOU EVER MADE? Happy birthday song, made for ‘Skype‘ it was fun doing that video.

WHO HAS THE HARDEST JOB IN THE BAND? (They all agreed) Sirius our manager by a long way. He has the hardest job, like if we decided to hate Sam, then for that week his life will be hell ha-ha

CAN YOU REMEMBER YOUR 1ST GIG TOGETHER? ‘Flower pot festival’ was our 1st.

WHY DO YOU CHOSE NOT TO WEAR SHOES IN YOUR GIGS NAT? Because heels which I’d love to play in, is impossible. The accordion is so heavy, I just want to be as free as possible.

WHAT MAKES YOU HAPPY?

WHAT MAKES A GOOD PARTY? Sausages, BBQ’d, on a beach with all my mates, unending cocktails and unending everything you want (Nat).

Not raining and free bars (Sam). I live it every year at Secret Garden Party, friends and fires music (Max). Friends at any party (Angus).

Good rum and great company and a Domino’s to argue over (Adam). Everything they all said and driving 5hrs to Wales I love Wales (Tom).

WHAT’S LINED UP FOR THE REST OF THE YEAR? ‘Bang’ EP release in May ( EP Track list, Tick Tock, Don’t panic, Trying and Give it a go). We’re on the main stage Boom-Town, Secret Garden Party, BBC introducing, The Olympic torch relay in London, Rhythms of the World ‘Hitchin Priory’, loads. 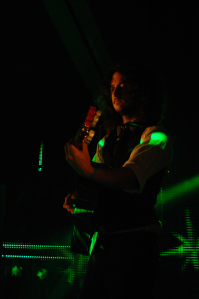 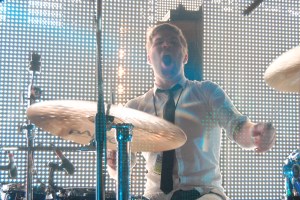 WHAT WOULD YOU LIKE TO SAY TO YOUR FANS? Thank you very much. We love you, and for your dedication, your loyalty. We love every single one of you, we will keep getting better, Listen to music you love. I say you should donate to save the badger, because they’re under threat and also bee’s look after bee’s as well (Sam). As you’re all going to die one day, get laid to our music (Nat).

Nat “Everyone should have other passions and not to put all your baskets into one exit” (with fits of laughter she was corrected it’s “all your eggs into one basket”. Dedication, find stuff that really inspires you and love what you do and be yourself. Never let excuses get in the way, don’t pay attention to others when they say nobody makes it as a musician. If you want to do it then just go, do it.

Other Jukebox FACTS: Natalia Tena has featured in the films ‘About a boy’ ‘Harry potter’ ‘Game of thrones’ ‘You instead’ ‘Bel Ami’ and fresh off the press ‘Clone’ ‘Switched‘ also working on a series in Spain called ‘ The blind man of Seville’. E.Ps, ‘DOUBLE DARE‘ & ‘BANG‘ also ‘Laid to Rest‘ & ‘Get Ready‘ singles. 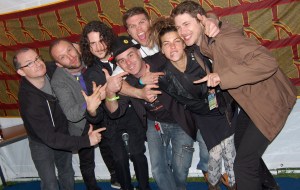