Numerous TV talent shows, 1 hit wonders, we’ve seen it all before. What’s happened to Longevity and real talent? Fear not, allow me to introduce Gabrielle Aplin.

A 19 year old singer/songwriter from Bath who’s been making quite a name for herself.

Her latest EP ‘HOME’ reached Top 10 in iTunes and was single of the week .

She has 3 self released EP’s already under her belt, air play on Radio 1 the UK’s number 1 station.

She’s just returned from a European tour with Gotye in Belgium and Holland, appearance on TV’s BBC 2 Review Show and a live performance of ‘Ghosts’ at BBC Introducing Maida Vale Session and in 2011 performed at the UK’s biggest festival Glastonbury to name but a few.

Gabrielle Aplin is proof that determination hard work and patience pays off.

On the 29th February the 1st night of her UK sell out tour she announced that a record deal has been made with Parlophone records and this young lady is just getting started.

Recently I met with Gabrielle & this is her story so far.

How did it all begin for you? It all started when my friend told me to upload a video on YouTube I was15 at the time. It was a Paramore song I just like playing covers and of different genres.

In the beginning it was just a hobby when I look back at my 1st few video’s sometimes I cringe and want to delete them but I can’t because my fans love them; it wouldn’t be fair. I guess people can see how I’ve progressed, like a timeline.

I love the creative side of music. I went to college and studied all the business side of it because I wanted to know how it all worked with the management and labels etc. Most artist don’t like that side of it but I’m fascinated by how it all works.

Explain your style? Musically I’d say my songs are Pop with Folky production. I love writing and would love to write for Olly Murs or Girl bands would be really cool.

You must have to pinch Yourself at times? Well kind of, but it’s not just happened over night it’s been very gradual and still is.

Glastonbury was my moment. I live in my own fairy world and I just go along with it. It was insane I was like hang on a minute I’m at Glastonbury wow. One of the great experiences in my life so far.

Where would you like to perform next? I’d love to go to America. A lot of musicians want to go to LA but I don’t. I’d like to go to Canada or Nashville and Australia that be really fun.

Gabrielle Aplin is leading the way forward for future artist’s, setting a high standard; Dedication radiates through her songs and pulls on your heart strings when you listen to her Angelic voice, Guitar/Piano skills, with such songs as ‘HOME’ ‘PANIC CORD’ and ‘LYING TO THE MIRROR’ and many other’s, also Her own interpretation of ‘Lana Del Rey’s ‘Video Games’ left Cardiff’s audience speechless.

What track do you connect with the most? At the moment it’s ‘HOME’ because I don’t really know where home is and I’m everywhere, it’s the most recently written.

I actually wrote the chorus a couple of years ago, so I’ve had it for a while. I’ve only recently finished it.

What’s planned after the tour? I’m cracking on with an album, literally the day after. I don’t want it to take a year to get it done, so I need to crack on.

I spoke to someone who pulled out of a deal because it was over produced are you worried about that? I could have signed ages ago but I wanted to tour, produce and release my own stuff 1st.Now I’ve met some amazing people in Parlophone with some great idea’s, not just the A&R but the online team the artwork team everyone. I can’t wait to work with them.

I’d still like to be involved; now I can commission artwork be involved with stage design, all those sort of things. The people at Parlophone are just so good and for me that’s what signing a deal was about. It’s not just about signing a deal, but to work with a great team.

GABRIELLE’S WORDS OF ENCOURAGEMENT I’d say a record deal isn’t the be all and end all. I think you should just focus on playing your songs to lots of people and experimenting and promoting everything yourself, then you have something to show for yourself.

That way you have something very valuable as opposed to having nothing and trying to get somewhere with nothing”.

I wouldn’t say Gabrielle Aplin is “one to watch” Rather one you have MISSED (until now) so sit back relax and let her music take you to some place Quiet.

Thanks to Gabrielle Aplin and All at Clwb Ifor Bach.

Gabrielle’s ‘The Power Of Love’ cover was used for the 2012 ‘John Lewis’ Christmas TV Advert. 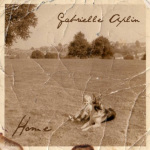 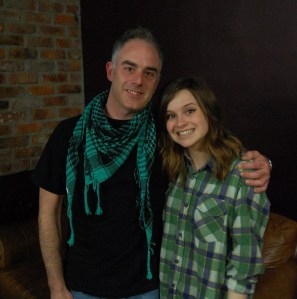