Terra Naomi: Singer Songwriter.. Allow me to introduce you to a worldwide music sensation that will captivate you with her tender sound & Beauty that will discreetly infect you to your heart. The first UK date sold out within 1 hour of being announced, as fans across the world eagerly await her return.

During the tour, Terra will be recording a new live album. “My dream in life is to play in beautiful theaters with fantastic sounds and tour as often as I want all over the world”

Terra is a music phenomenon in her own right, Originating from New York; currently on her sell out tour in Europe and the UK promoting her latest album titled To know I’m ok

“making the album was fun, exciting and it is what it is, now I just want to get out and play, to me that’s the most important thing, the album gives me an excuse to tour.

Live performance is my favorite thing not just recording music, it’s Live shows I love it”.

In the beginning she had offers from record companies etc, at times made the wrong choices, Terra did the best she could and what she thought was right, now she follows her own heart, it was then she Found her Diamond, to shine and do it the way she originally intended, her lesson was to never give up and trust her instincts Terra knew from 3 years old that she wanted to sing. MySpace was her 1st venture into the Internet world of advertising her music; she uploaded “Say its possible” and soon found that everybody was responding to her in a big way, it was purely a fan base situation, no management, no interest from the industry. Many of her friends and older brother said to check out YouTube and the rest is History.

A few years later she had an offer to work with Island records in London, she moved to the UK and produced and released her 1st studio album “Under the Influence” in 2007, she loved her songs but wasn’t content with the production.

“it just wasn’t my sound it didn’t feel like it was me I’m more of an Acoustic sound and less produced and what I do Live is the best representation of me and my music, where I really shine is Live and it’s my voice and hearing it, and when there’s layers and layers of production over the top it was too crowded”

she left Island Records, “it was really a tough choice but looking back the best choice I made”

“In the last 12 months I’ve played at some beautiful theaters, I love the acoustics so much it’s not as crazy or as exciting as playing in Kashmir, Moscow or Wembley stadium but I just love to be sitting on a stage with a beautiful grand piano and hear that great sound, my favorite track to play at the moment is Nothing to Hide ”.

I asked her what she misses the most at home,and if she was taken to a Desert Island what would she take “I miss my dog Elliott, AND I’d take my Dog, my guitar, Mp3 and a piano”.

She describes herself as creative, friendly and Quirky and tenacious and won’t let any momentary defeat knock her off her path and is driven in all aspects; she likes to read mostly fiction, The Hunger Games is her favorite at the moment.

Terra’s Final Quote “Everybody’s path is different and in this industry its necessary to have a drive, because you’re going to get knocked, don’t look at other paths too much and focus on the one that’s been presented to you and make the best of it”…

With her ever successful sell out tours, album/singles sales world-wide over 21 Million YouTube views & counting, reviews and thousands of old and new fans alike, I’d “Say its possible” she’s doing something right! CLICK HERE to go to her MUSIC Store 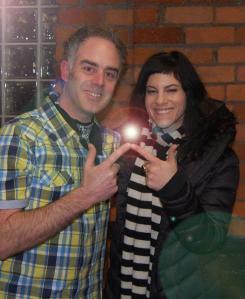